You are here: Home / Human Interest / Supermoon spurs many pictures and stories 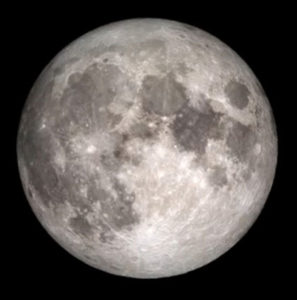 Many Iowans likely didn’t need a night light to navigate their homes in the dark last night as there was an abundance of moonlight.

This month’s full moon is what’s known as a “supermoon” as the moon is several thousand miles closer to earth than usual. Deb Bonser with the Ames Area Amateur Astronomers says she plans to go out tonight and take a few photos of the moon.

“It depends on what the skies are like,” Bonser says. “As long as they’re clear, I will. It probably will look best as it’s rising in the east.” The forecast calls for mostly clear skies and lows in the 30s for much of Iowa. The moon doesn’t orbit the earth in a perfect circle. It’s more of an oval.

Tonight, the moon will be about 221,000 miles away when on average, it’s around 239,000 miles away. That’ll make it appear brighter and bigger to anyone who looks up. “It will look prettier, that’s mainly what they see,” Bonser says. “It probably will look a little bit closer than it does at other times but there’s a lot of hype around how it looks so much bigger. Some people can see it and some can’t.”

There’s a lot of mythology about the moon and the supermoon. Social media is full of folks speculating about whether the supermoon will mean more earthquakes, political unheaval or outlandish behavior. Being an astronomer, Bonser doesn’t buy into any of that. She’ll just be glad if people are taking a little more interest in the stars and other celestial bodies.

Iowans have a particular advantage when it comes to star-gazing as wherever you are, you’re probably not too long of a drive away from the city lights. “It’s always a little bit easier to see some of those things when you’re out in the country or where it’s not quite so light-polluted,” Bonser says. “One of the nice things about the moon is, it really doesn’t matter because even in town where there’s lots of light pollution, you’ll still be able to pick out the moon.”

Supermoons aren’t all that rare. They happen about once every 14 months, but this supermoon marks the closest the moon has been to earth since 1948 and it won’t be this close again until 2034.