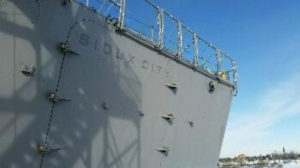 The commander on some of the crew of the USS Sioux City visited the ship’s namesake city this past weekend as part of Veterans Day activities.

The USS Sioux City is one of the new littoral ships designed to be used closer to the shoreline for things like mine detection, anti-submarine warfare and surface warfare. Commander Shockey Snyder talked at the Siouxland Chamber luncheon about other uses for the ship

He says it might also be used for humanitarian missions, search and rescue, counter narcotics in the Caribbean and support to special operations.

Snyder says the ship will be commissioned at a yet to be determined location in the fall of 2017. He says this time the Navy will have to break from the tradition of where it hosts the commissioning.

“Starting with the USSYorktown…if it’s possible to go to the namesake city, that’s where we like to commission the ships. I am sorry we can’t bring the ship here,” Snyder said, “we can’t get up the river.” The ship is currently undergoing systems testing. A spokesman for the Siouxland Chamber of Commerce says a local committee is being formed to help plan the event.