You are here: Home / Sports / High school championship games kick off in UNI-Dome 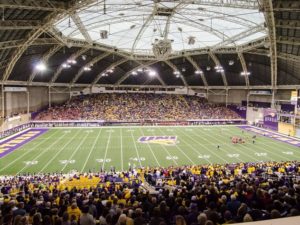 Harris-Lake Park hopes its first trip to the championship game ends with a state title when the third ranked Wolves play No. 4 Don Bosco for the eight-man crown Thursday morning in the UNI-Dome. Harris-Lake Park is 12-0 and ousted top ranked Fremont-Mills in the semifinals.

“It’s the culmination of the kids putting in a ton of time and doing things the right way and getting in their during the summer and lifting when it would be easy not to”, said Harris-Lake Park coach Lane Gunderson.”

Don Bosco is 11-1 and has found a home in the title game.

“Over the last five years we have been in the championship four times so we have been there a little bit”, said Dons coach Colby Yoder. “The personal development from the youth all the way to the top has just been great for the community and coaches as well as all the community involvement.”

Keith Crane from KCHE contributed to this story