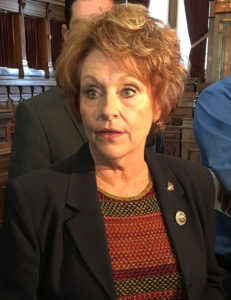 The 59 Republicans elected to serve in the Iowa House for the next two years have re-elected Linda Upmeyer of Clear Lake as the top GOP leader in the House.

The group met in private today to start discussing what priorities to pursue in the 2017 legislative session, but Upmeyer, who will serve as House Speaker, isn’t revealing details of the GOP’s agenda.

“The information has not yet been all synthesized,” Upmeyer told reporters in a news conference this afternoon.

In the past six years, House Republicans have passed bills to cut Iowans’ personal income taxes, but those bills were never considered in the Democratically-led state senate. Now Republicans will control the debate agenda in the senate for the next two years, but Upmeyer isn’t ready to say what tax policy Republicans in the legislature may pursue.

“We’re certainly going to study that topic,” Upmeyer said. “I don’t know where we’ll end yet.”

And beyond reducing “duplication” and looking for efficiencies in the state budget, Upmeyer said it would be a “stretch” to expect entire state agencies to be shuttered. 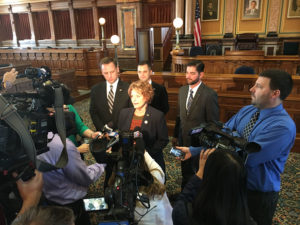 Linda Upmeyer meets with reporters in the House chambers.

“People want solutions. They want to be heard and to make the state run a little better, but I think we’re still, maybe, deciphering some of the message,” Upmeyer said. “…We’ll have many conversations about many things and today I’m pretty confident that we’ll come up with a good budget that meets the needs of Iowans and is very responsible, so we’ll see. There are lots of ideas and we’ll see which ones actually gain traction.”

Upmeyer told reporters she is “not entirely sure” what the GOP agenda may be on state funding for schools. She confirmed there will “be discussions” about collective bargaining rights for unions that represent government workers, including teachers, but Upmeyer’s not revealing much.

Bill Dix of Shell Rock will be the top GOP leader in the Iowa Senate next year. He told reporters last week that legislators “need to do a better job” of making government “smaller and more efficient.” Upmeyer today said most of the “angst” among voters was over the gridlock and inaction in the federal government.

“Certainly in Iowa we want to guard against having that same kind of environment, but things in Iowa actually had been working pretty well,” Upmeyer said. “So I think at the same time that we’re focusing on the things we’ve done well, I think we also have to focus on the things where there are opportunities for changes and improvements, so I think we listen…We do more listening and less declaring right now.”

House Republicans will meet again in December to discuss policy options. In the meantime, Upmeyer is suggesting legislators keep seeking suggestions and opinions from their constituents.

Also today, House Republicans re-elected Chris Hagenow of Windsor Heights as House Majority Leader. Representative Matt Windschitl of Missouri Valley will be the third-ranking Republican in the House, in the position of speaker pro tempore.