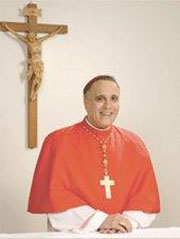 A man who led the Sioux City Diocese for nearly a decade has been elected by U.S. bishops to be the top Catholic leader in the country. Cardinal Daniel DiNardo will be president of the U.S. Conference of Catholic Bishops for three years.

“Pray for me,” DiNardo said in a video message posted on YouTube. “…Let’s together move ahead in the vision of mercy that Pope Francis has given us.”

DiNardo was bishop of the Sioux City Catholic Diocese from 1997 to 2006. He’s currently the leader of the Galveston-Houston, Texas, archdiocese.

DiNardo is flying to Rome after the U.S. bishops conclude their meeting in Baltimore today. He hopes to meet with President-elect Donald Trump when he returns. DiNardo has said when considering immigration policy and civil rights issues under a Trump Administration, he’ll stress the church’s call to “respect the human person in our midst.”

The U.S. bishops have also chosen DiNardo’s successor, too. It will be a Mexican-born cardinal who became a U.S. citizen 21 years ago.