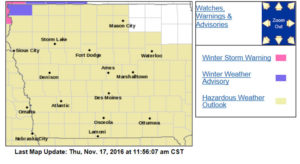 This is the last day for the unseasonable warm weather, so get in one last bike ride and rake the leaves, because a cold front is coming and it’s bringing Iowa’s first snowfall of the season.

Meteorologist Rod Donavon, at the National Weather Service, says a Winter Weather Advisory will be posted for parts of northwest Iowa tomorrow, zeroing in on Lyon County.

“We are expecting rain changing over to snow, especially late tonight and into the day on Friday,” Donavon says. “It looks like there could be anywhere from one to four inches of snow across that region. Another impact up there is going to be the strong wind so any snow that does fall, certainly there could be some blowing snow up in that region as well.”

Des Moines may tie a record high temperature today at 75 degrees, but don’t be fooled, the arctic blast is coming, so bring a coat to work or school tomorrow. “We are expecting very mild temperatures across central and southern Iowa today with highs in the 70s and a little bit cooler across the northwest today,” Donavon says. “A big cold front goes across on Friday. Even though it may start out mild, especially across central and southeast Iowa tomorrow, there’ll be falling temperatures throughout the day and much of the state will be in the 30s to 40s by the afternoon.”

The cool weather should be sticking around the state at least a week, he says, with the potential for a slight warmup around — or just after — Thanksgiving.