You are here: Home / Education / State Board of Education discusses how schools report bullying 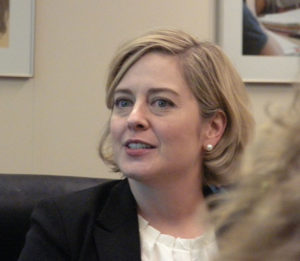 Data collected from schools across the state shows some ups and downs in the reporting of bullying in the last several years. The State Board of Education got an update Wednesday from Amy Williamson, who leads the Department of Education’s Bureau of School Improvement.

“We collect what protected category the bullying and harassment falls in — there at 17 categories identified in the law — what bullying method it was, what location it occurred in the bullying type… and the consequence of the action,” Williamson says.  The 17 protected categories under the law are: Age, Color, Race, Creed, National Origin, Ancestry,Marital Status, Sex, Religion, Gender Identity, Physical Attributes, Family Status,Political Belief, Political Party Preference, Socioeconomic Status, Sexual Orientation, Physical/Mental Abilities, Other. 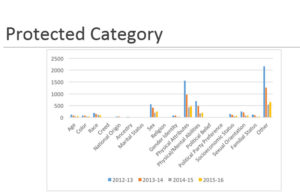 This shows which protected class the bullying was reported under.

Williamson says they’ve been collecting bullying data since 2007, but changed the categories used in 2012, so that is where they begin looking at trends in the number of reports.

“One is trying to get some common understanding of what actually is bullying or harassment — especially according to this law,” Williamson explains. “And when do I put it in this data system. When am I supposed to report it to the state and when do I handle it myself. That has been difficult.”

Another reason for the changes in reporting incidents could be due to more focus on the issue. “After 12-13 we had a ton of media coverage on bullying and harassment. I am not suggesting that people artificially started deflating their numbers — I am suggesting they started paying attention to it. And started thinking hard about so what is it we are supposed to report?,” according to Williamson. “And they really started watching the webinars, we got more attendance. People started actually reading more of the guidance and we got a lot more attention on the subject.”

Williamson went on to show a chart on what prompted the reports of bullying and harassment. “By protected category, we see a lot more in the physical attributes category, and then sex, physical-mental abilities, and then there is a ton of these in the ‘other.’ Because you can see, even with 17 categories, we are not capturing everything,” Williamson says. 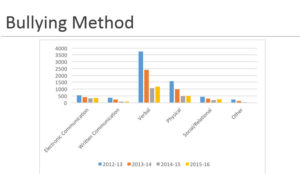 This chart shows the methods of bullying that were reported.

She detailed the top methods for bullying.”Our most frequent is verbal, then physical, very few others here,” Williamson says.

She says they track bullying and harassment by teachers against students, but says there have only been a couple of those cases, which happened in 2012.

Williamson also says it appears the bullying cases may be leveling off, which she says is a good indication that the educational efforts on how to report are working.

The Board of Education discussed the bullying statistics as a continuation of its discussion in August of possibly changing the deadline for allowing students to open enroll to another school if they felt they were being bullied, but that bullying wasn’t covered under state law.

A bill passed by the legislature and signed into law by the governor went into effect in July that allows students who transferred to another school after a confirmed report of bullying to immediately be eligible to participate in sports at their new school.

Charts courtesy of the Iowa Department of Education.