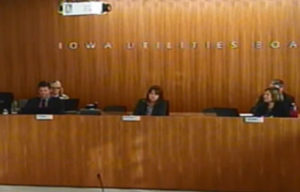 Members of the Iowa Utilities Board listen during Thursday’s meeting.

The Iowa Utilities Board heard an update on the progress of the construction Dakota Access Pipeline through the state and complaints from those who oppose it at their meeting Thursday.

IUB attorney David Lynch gave the latest progress report from the company. “It indicates that 99 percent of the pipeline in Iowa has been lowered into the trench — and 96 percent of that trench has been backfilled. Only Buena Vista and Cherokee Counties are not yet complete to that stage,” Lynch says.

Work is more than halfway done in finishing up construction. “The report also indicates that 52 percent of the clean up and land restoration has been complete, while 61 percent of the pipeline in Iowa…has been hydrostatically tested,” according to Lynch. Lynch told the three board members information from the board has been filed in the lawsuit against the pipeline.

He says those who filed the lawsuit have until next Monday November 21st to file their reply briefs, and the oral arguments before the district court at still set for December 15th.
He says they received three more complaints about the pipeline since the last meeting. “This gives us a total of 23 inquiries or complaints that have been filed since the first one on March 31st 2016. Fifteen of those 23 have been closed and eight of them are still in process. Most of those are in a state of a proposed resolution being drafted,” Lynch says. 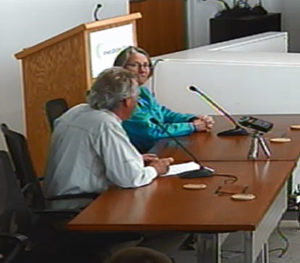 Mark Edwards and Carolyn Raffensburger speak to the Iowa Utilities Board.

The board heard from two representatives of Iowa Citizens for Community Improvement. Mark Edwards talked about concerns that the pipeline workers did not drain water away from the areas where they worked. He told the board it was difficult to get complaints addressed and says the county board of supervisors did not want to take action because they were afraid of being sued.

“I could go on with further examples of going down this rabbit hole of this public plunder for private gain. But it has been clear from the beginning that this is a rigged game,” according to Edwards. “Three politically appointed people have been given the power to risk the public waters, land and navigate private landowners’s rights. These proceedings have been quite the education and clearly illustrate we have little hope in our government to protect our rights and our land and our water.”
Carolyn Raffensburger also spoke about what she says are violations by the construction company, including continuing construction on land that was inundated with water. “What we have seen is that they have violated the largest commitments that they made and down to the smallest ones,” Raffesnburger says. “What we now know is that this is the rule of money rather than the rule of law. If there is not monitoring and no enforcement of your regulation — of the rules that you put in place — then it has no meaning whatsoever.” Raffensburger made another plea for the construction to stop.

“What we’re asking you today is to put on hold the rest of the construction. They are not done with construction in two counties. They have not complete the boring under the Des Moines River. That is not complete. We ask you put that on hold, that you stop construction until your rules have been followed,” Raffensburger says. The IUB also heard from people about the pipeline during their public comment period. They listened for around 30 minutes to comments of those who are opposed to the pipeline. The board did not give any response to the comments.