You are here: Home / Agriculture / Turkey supply is back up after last year’s bout with bird flu 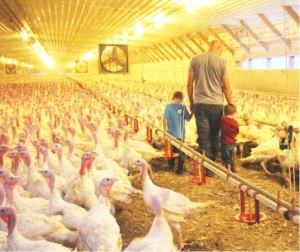 Iowa grocery stores will be exceptionally busy this weekend as Iowans stock up on supplies for next week’s Thanksgiving feast.

Turkeys will be one of the top sellers for the next several days.  Shayle Shagam is a livestock analyst with the U.S.D.A. and says production has rebounded in Iowa and elsewhere after last year’s bird flu outbreak.

Shagam says, “A lot of the operations are now running above a year ago, in some cases, a little above where we were in 2014, partially in response to the prices, relatively low grain prices.”

Turkey industry officials in Iowa say the state’s operations are back at capacity and Iowa has moved from the 9th largest turkey producing state to the 8th largest. Next year, it’s expected Iowa will reach the 11-million mark for turkeys raised. It’s simple supply and demand, Shagam says, as turkey supplies are up so prices are falling.

“The wholesale price of a hen turkey last week averaged about $1.25 a pound which compares to about $1.31 a year ago,” Shagam says. “We can see lower prices. Some of the price pressure we saw in 2015 as the result of the tight supplies has dissipated with the increase in production.” Many Iowans have big freezers in their garages or basements for storing food.

Marianne Gravely with the U.S.D.A.’s Meat and Poultry Hotline, says she’s had calls from people who’ve had a turkey frozen for ten years and wonder if it’s safe to thaw out now and cook.

“What we tell people is that a turkey will keep its best quality for a full year,” Gravely says. “After that, it will lose flavor or dry out.” She reminds, that’s a quality issue, not a safety issue. For questions about buying, thawing and preparing a turkey, call 888-MP-HOTLINE.