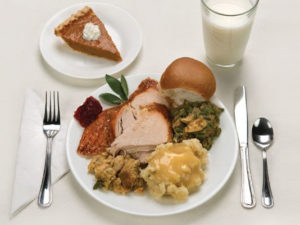 The American Farm Bureau’s annual Thanksgiving Day Dinner survey finds a drop in price this year. Iowa Farm Bureau Director of Research, Dave Miller, says you will once again be able to serve a family of 10 for five dollars each.

“The total price was 49-87, down from 50-dollars and eleven cents,” according to Miller. The survey checks the prices of turkey, bread stuffing, sweet potatoes, rolls with butter, peas, cranberries, a relish tray of celery and carrots, pumpkin pie with whipped cream, and coffee and milk when setting its meal price. The main course saw the biggest drop in price.

“Turkey prices this year at the wholesale level are down about 10 percent from a year ago,” Miller says. The bird flu had a big impact on overall turkey supply last year, which drove the price up. But Miller says there wasn’t a huge surge in price as retailers balanced things out.

“Grocers ate some of the increase in turkey prices when turkeys were short last year because of avian influenza,” according to Miller. “This year they are not passing all of the decline in price through.” The average cost of turkey this year is $22.74 for a whole bird or $1.42 per pound. That’s a decrease of 30 cents for a whole bird compared to last year. Miller says the Thanksgiving meal survey hasn’t seen a lot of ups and downs.

“When you look at it — the last five years we been right at or below this five-dollars-per-person for a meal for ten. You know, the cost of food really hasn’t gone up in five years according to the survey for the Thanksgiving Dinner,” Miller says. Almost every item on the dinner menu dropped in cost this year.

“The one thing that did go up was rolls and that’s sure not because the price of wheat or flour went up — because those are down. It does emphasize just how good of a bargain food is in the U.S. and how well farmers are doing at keeping food affordable and plentiful here in the U.S.,” according to Miller. He says you should add farmers to your list of things to be thankful for this holiday.

“I think Thanksgiving is a good time to remind us of just the bounty that we all have and the blessings we have in this country,” Miller says, “and how blessed we are to have the farmers who are out here. You know one-and-a-half , 2 percent of the population are directly involved in agriculture.”

This is the 31st year the American Farm Bureau has done it’s Thanksgiving Meal Survey.