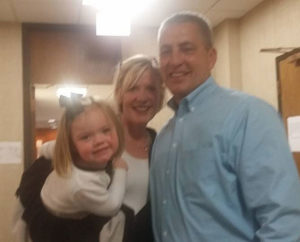 Dozens of children were adopted in ceremonies held over the weekend in six Iowa cities as part of National Adoption Day.

At the Hamilton County Courthouse in Webster City, 21 children were adopted by 15 families. Deborah and Mike Kleis from Stratford added to their family.

“It was a calling from God,” according to Deborah Kleis, while her husband says: “This is our granddaughter, now our daughter. She needed us and we’re glad we were able to be there for her.”
The child, Jacey, is two years old. Mike Kleis says he’s thrilled to have her as a part of the family.

“It changed our plans but we’re extremely happy,” he says. “She brings a lot of joy to us and we really like having her around.” Kleis has a recommendation to those Iowans thinking about adoption.

“There’s a lot of children out there who need help and if you’re able to provide, I think it’s one of our duties to make sure these kids grow up with every opportunity and chance that they deserve,” he says. Adoption Saturday ceremonies were held in Burlington, Council Bluffs, Davenport, Des Moines, Sioux City and Webster City. The largest ceremony was in Des Moines with 70 children being adopted. Learn more about adoption at www.iowakidsnet.com.