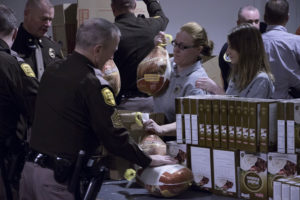 More than two dozen state troopers and police officers converged on the Food Bank of Iowa early Monday to make an arrest. Food Bank spokesman Danny Akright says the subject of the arrest is hunger.

“Arresting Hunger is a really unique campaign where law enforcement agencies throughout the state raise funds to pay for holiday meal boxes for families,” Akright says. He says the officers and troopers met at the organization’s Des Moines warehouse to fill the boxes.

“With turkeys and stuffing and gravy and all kinds of 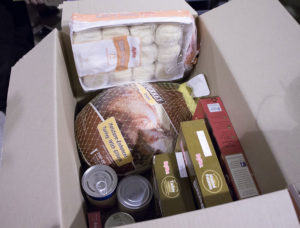 Thanksgiving fixings,” Akright says, “And those boxes are going to go out to one family in all of Iowa’s 99 counties and 25 families here in Des Moines. The Iowa Foodbank Association works with the law officers to distribute the boxes.

“Last year Captain Ken Clary — who is with the Iowa State Patrol — started this campaign and worked with us to source some food to make these holiday meal boxes happen,” Akright explains. “Now this year they had about $12,000 donated to this program and it has more than doubled from last year and they were able to expand their reach. This year the Des Moines PD got involved in a big way and I know that other 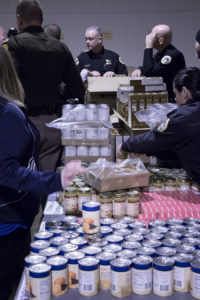 departments, like Waterloo and Dubuque have gotten involved as well.”

Akright says the program fits perfectly with the mission of the state’s food banks. “We are here…to serve the public in much the same way that our law enforcement and our other first responders are here to do. So when we have that ability to partner with those folks who have that same mentality of doing what is best for everybody who is a citizen of the state, it really is kind of serendipitous.”

The Iowa Food Bank Association (IFBA) is a collaboration of the eight Feeding America food banks that serve all Iowa’s 99 counties.