You are here: Home / Agriculture / Some harvest work remains in southwest and south central Iowa 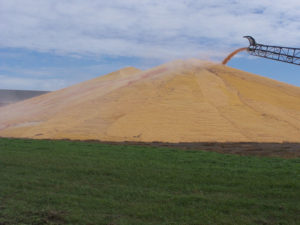 Grain pile at the Farmers Cooperative Society in Sioux Center.

There’s just one section of the state that’s still behind in completing the corn and soybean harvest.

The latest U.S.D.A. crop report shows that southwest and south central Iowa still have approximately 8 percent of the corn crop and 5 percent of their soybean crop to harvest.

The report says the harvest is virtually complete in most other areas of the state, with 98 percent of the corn out of the fields. That puts the corn harvest — which had lagged behind for awhile due to weather — 2 days ahead of the 5-year average.

Iowa’s ag secretary says it looks like farmers are going to set records for yields and total production of corn and soybeans once all the numbers are in.