You are here: Home / Agriculture / Two Iowa turkeys in DC for presidential pardoning 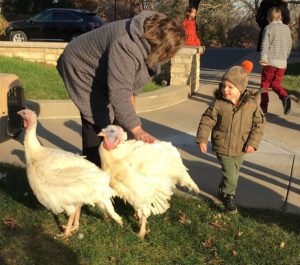 Two Iowa turkeys flew to Washington, D.C. Monday afternoon. They made the trip on a plane. On Wednesday, the president will pick one to be part of the annual turkey pardoning ceremony at the White House.

“They came from Chris and Nicole Domino’s farm up by Early, Iowa,” according to Greta Irwin of the Iowa Turkey Federation.

The turkeys were hatched in mid-July and are about 18 weeks old.

“The family has five daughters and the five daughters were actively involved with caring for these turkeys, for training for them to go to the White House because we want very calm, very tame turkeys,” Irwin says. “…The daughters have been playing music for them, grooming them, playing with them, petting them and just getting them accustomed to being around people.”

President Obama will name the two Iowa birds that were sent his way this week, then one of the two will be featured in a ceremony in the White House Rose Garden early Wednesday afternoon. Both turkeys will go live in Virginia after the ceremony. Irwin flew on the same plane as the Iowa turkeys and she’ll accompany them to their new home.

“Once these turkeys are pardoned, they’ll go to Virginia Tech…and they’ll be part of their teaching curriculum that they use out there,” Irwin says. “So the turkeys will have a nice long life out there with the students at Virginia Tech.”

President Lincoln declared a day of national Thanksgiving in 1863. According to the White House website, Lincoln offered clemency to a turkey that same year. The National Turkey Federation has been presenting presidents with turkeys since 1948, but it seems President George H.W. Bush started the pardoning in 1989.

The Iowa Turkey Federation has been selected six times to provide the presidential turkey at Thanksgiving.