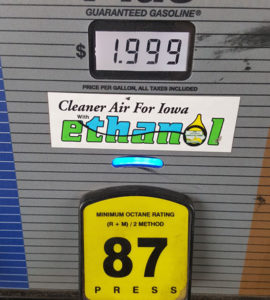 Supporters of ethanol are applauding a decision today from the U.S. Environmental Protection Agency.

Iowa Renewable Fuels Association executive director Monte Shaw says the EPA has set the Renewable Fuel Standard (RFS) for corn-based ethanol next year at 15 billion gallons, the level called for by Congress in the RFS law.

“That’s where it should have been the last two years, but they’ve been lowering it and we’ve been kind of having a disagreement with the EPA over that. We’re really excited. It sends a strong signal that we’re getting the program back on track,” Shaw said. Earlier this year, the EPA had proposed 14.8 billion gallons of ethanol be blended into the nation’s fuel supply in 2017.

It’s unclear why the agency reversed course and increased the RFS. “It’s hard to say, but the statistics really were just overwhelming this time,” Shaw said. “I mean, the amount of ethanol being used this year already exceeded what they had proposed for next year. So, how can you not say we can do more?” It’s particularly good news for corn growers who are struggling to break even on their crop.

“There’s definitely going to be an upward pressure on commodity prices, which is good,” Shaw said. Shaw also suggests the move will lead to lower prices at the gas pump.

“You’re going to start seeing more and more places offering higher blends, like E15 and E85. Those are lower priced. So, to have access to those lower priced, cleaner burning, high octane fuels — that’s a win-win for consumers,” Shaw said. While praising the EPA’s decision on ethanol, Shaw and many of Iowa’s top political leaders are criticizing the agency for its biodiesel target of 2.1 billion gallons for 2018.

Shaw says the EPA is “ignoring underutilized U.S. biodiesel production capacity and surging biodiesel imports.” Iowa is the nation’s top producer of both ethanol and biodiesel.