You are here: Home / Agriculture / Iowa turkeys featured at the White House 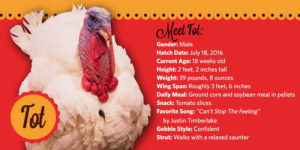 It was announced earlier this month that Iowa would supply the turkeys for the pardoning.  Voters on Twitter got to select which of the two birds would be the first selection for the pardon.

Tot and his back up Tater were raised on the Chris and Nicole Domino farm in rural Early, Iowa. 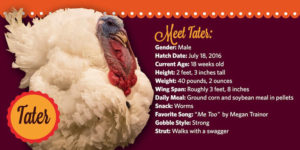 Tot weighed 39 pounds eight ounces and was born July 18th. Both Tater and Tot will now live at Virginia Tech.