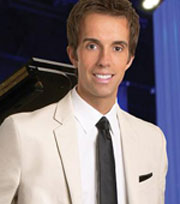 Eastern Iowa pianist Jim McDonough will open his Christmas concert series over the Thanksgiving holiday. McDonough will spend the next four weekends touring nine Iowa cities with his “Holiday Grande” variety show to benefit Camp Courageous, a facility for special needs people in his native town of Monticello.

“It’s going to be absolutely spectacular,” McDonough says. “I’ll be joined on-stage by my 14-piece professional orchestra, I’m at a concert grand piano and then joined also on stage by a cast of sensational singers and dancers. These are some of the finest entertainers in all of Iowa.” The show promises intimate songs where it’s just McDonough and his piano to big production pieces which he says rival shows in Vegas or Branson.

“We are not only taking the message of Christmas to some of the most beautiful venues in Iowa, but we’re also spreading the message of Camp Courageous,” he says, “and what better time than the holidays to extend a hand to those in need.” The tour opens Friday in Manchester, goes to Ottumwa on Saturday and Des Moines on Sunday.