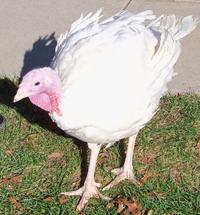 Most Iowans will soon be sitting down at the table for a Thanksgiving meal and many will be serving up the traditional main course of turkey.

Iowa saw very promising numbers last year despite the bird flu outbreak in the state. Irwin say the rapid recovery and growth of the industry is remarkable, though she says there’s still room to improve, especially in one area.

“We are 5th in the United States in turkey processing,” she says. “A lot of our birds have been coming from adjoining states like South Dakota, Minnesota, Illinois, Nebraska and Missouri. Our processors see great value in having those birds right here in Iowa, which, I think as Iowans, we’d agree with that.”

“Each bird we raise in Iowa is over $25 worth of economic activity,” Irwin says. “We’re talking a bushel of corn and a third of a bushel of soybeans that those turkeys will consume. Let’s keep that money right here in Iowa, raise those birds in Iowa.”

The Iowa turkey industry also got a boost this week as the turkey that was “pardoned” by President Obama in a White House ceremony was raised on a farm in western Iowa.