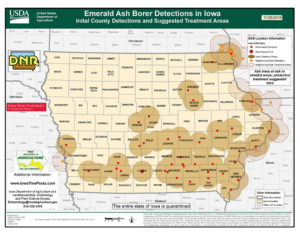 A destructive insect has now spread to 39 of Iowa’s 99 counties.

The emerald ash borer (EAB) has been positively identified in southern Iowa’s Clarke County, according to the Iowa Department of Agriculture. The Asian beetle has destroyed millions of acres of ash trees in the U.S. over the last decade. Many Iowa cities have been removing Ash trees in poor condition, while treating healthy Ash trees with insecticide in hopes of stopping or slowing the spread of EAB.

The Iowa Department of Natural Resources is conducting tests in southeast Iowa’s Jefferson County with tiny, stingless wasps that are natural enemies to the ash borer. But, officials say it could take many years for the wasp population to grow large enough to kill off the ash borer.