You are here: Home / Crime / Courts / Governor: law on ‘dash cam’ videos may need to be ‘clarified’ (AUDIO) 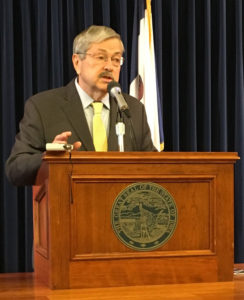 Governor Terry Branstad says it may be time for state officials to “carefully” review when video from police cameras mounted on dash boards and police body camera footage may be released to the public.

“This is kind of a recent development, these police cameras, and I think it would be appropriate for us to carefully review our laws,” Branstad says.

Cedar Rapids police have not released the video of an officer-involved shooting during a traffic stop on November 1. The Linn County Attorney has said the video of the shooting is exempt release under Iowa’s Open Records Law. The Iowa Public Information Board told Cedar Rapids media it’s up to the police chief to decide whether the dash camera should be released.

“The Iowa Public Information Board was established to really be able to answer questions that come up on this subject,” Branstad says, “but if there is an ambiguity or if there’s areas that need to be clarified, it may require legislative action so that’s something that I think we need to carefully look at and determine what would be appropriate to again protect the public safety, but do it in a way that’s fair and even-handed.”

Branstad says in general, he supports “transparency” that makes nearly all government documents and records public, but he says releasing these kinds of videos could “jeopardize” prosecutors’ ability to get a conviction.

The Linn County Attorney is convening a grand jury to determine whether the Cedar Rapids policeman was justified in shooting Jerime Mitchell, who goes by the nickname “Danky”. Mitchell was shot in the neck during some sort of altercation with the officer and is paralyzed. Cedar Rapids police have not said why Mitchell was pulled over or what may have led to the altercation.