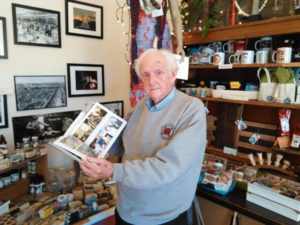 A Sioux City man who has captured national and local history with his camera for years is telling his story and showing off some of the pictures in his newly released autobiography called “Clix.”

George Linblade says people have been bugging him to write his autobiography and he finally decided to do it.

“So we started digging through all the old newspaper clippings and things like that and old photographs we have quite a history of material. Of course there’s a lot of stuff I don’t have anymore — but we figured it out that we had enough stuff that would make a book that would be remotely interesting,” Linblade says.

Linblade has been Frank Sinatra’s personal photographer, taken photos for Playboy as well as clicked off photos of several presidents, popes and other leaders and entertainers.  There’s also been an element of danger in many of the things he’s covered.

“The Watts riots, a prison riot in Illinois, and few things like that. And you wonder when you look back at it, wow would I do that today? And commons sense says ‘ no don’t do that you could get hurt,'” he says. “We’ve always had the attitude if we don’t do it, who will? Let’s go do it.” Linblade is the official photographer for Sioux City Fire and Rescue and has also helped develop ad campaigns for companies like IBP and Gateway computers. He was part of the development of Gateway’s iconic cow spots logo.

He says the sale of computers were cyclical and they were trying to figure out how to get people to buy more. “We jokingly said maybe if you put them in a cowhide box people would be more apt to buy them year round,” Linblade says. He says they developed a box that looked like a jersey cow with spots and it caught on and is still used by the current manufacturer of the computers. Linblade says writing the book made him reflect on his future.

“It’s kind of like doing your own obituary,” Linblade explains, “there are moments where you are very up and at ’em and then other ones you think this is pretty much finality here. So, at the end of our book we said ‘to be continued’ to kind of take some of the pressure off.” You can find a copy of “Clix” at Sioux City Gifts at 1922 Pierce Street, on the store website and on facebook.