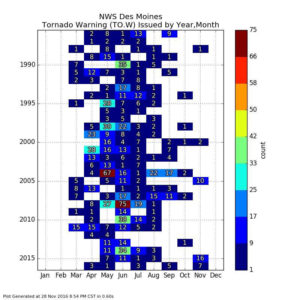 Damage assessment teams from the National Weather Service are fanning out to several Iowa locations after as many as six tornadoes touched down Monday afternoon in Butler, Hardin, Grundy and Poweshiek counties.

Meteorologist Rod Donavon says none of the twisters were very powerful and the largest appeared in the Hardin County town of Radcliffe.

“At this time, that’s one that certainly went through town and it was surveyed yesterday with EF-0 damage indicated with mainly tree damage and some minor roof damage throughout the town,” Donavon says. “We did have another tornado up near Parkersburg, along the east side of town which was highly visible but up there as well, it seemed like it was pretty minor damage.” 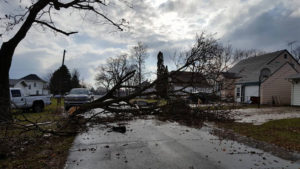 Parkersburg was hit by an EF-5 tornado in May of 2008 that killed 7 people, injured more than 70 and destroyed or damaged more than 400 homes and businesses. For the second year in a row, the most monthly tornado warnings issued by the Des Moines office of the National Weather Service came during November. A total of 16 tornado warnings were posted during November of 2015 and this year’s 11th month is also very busy.

“That’s true, we had November 11th which had several tornadoes move across the state and then again yesterday where we had at least six tornadoes that moved through the state as well,” Donavon says. “That certainly is the most in each month, at least for tornado warnings. We’ve been pretty quiet everywhere else during the summer months.”

The twister that touched down Monday near Grundy Center was accompanied by hail that was so thick, roads had to be cleared with snow plows. Other possible tornadoes were reported Monday in Monroe, Marshall and Tama counties. Tornadoes can strike during any month but it’s atypical to see so many during November, especially two years in a row.

“Certainly quite unusual as our peak months are usually April through June,” Donavon says. “Every once in a while, we’ll have these maxes in the late fall, October-November time. I think the most famous one was November 2005 when we had an Iowa State football game going on, tornadoes near Iowa State and Ames.” One twister was visible from the stadium and forced the evacuation of tens of thousands of fans.

That month, there were preliminary reports of as many as 20 tornadoes in Iowa, the state’s largest-ever tornado outbreak during November.