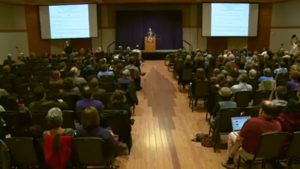 Neil Theobald speaks at a forum on the UNI campus in Cedar Falls.

The first finalist for the president’s job at the University of Northern Iowa comes from a teaching background and has done some work in the state in the past.

Neil Theobald held and open forum on the Cedar Falls campus Tuesday where he talked about visiting Iowa while working on teach pay plans at the University of Indiana. 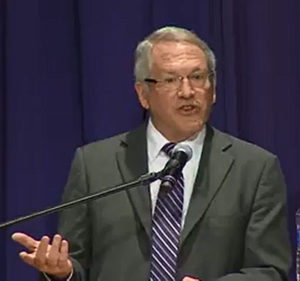 “I worked for a commission in the summer of 2000 that Governor (Tom) Vilsack had put together, and got to travel around the state from Sioux City, was in Ottumwa, went all around the state. I talked to people about how well the school funding system was working in Iowa and then produced a report,” Theobald says.

Theobald eventually went into administration was the president of Temple University until resigning in July.  He talked about why he left that school.

“This summer I was directed to hire an individual to an open dean search without faculty input.  I consulted with the provost who was strongly opposed to the appointment. I chose to not to break the covenant of shared governance — which as I mentioned earlier — I have found to be essential in operating a university,” Theobald says.  He says he felt it was important to keep the faculty involved in the decision. “The consequence of standing for that principle is I had to leave. And I am fine with that,” Theobald says. “(There are) a lot of stories that aren’t accurate are out there and I’ve note that they have been recycled in some Iowa newspapers the last day or two,” Theobald says.

Theobald says he was not prepared for people to call news conferences and react to his action and says he did not want to hold his own news conference to respond. “I made the decision that it would be of no value to Temple University for me to hold a press conference about why I had made the decision and that it would be best for the university for me to move on, and I did,” according to Theobald. “So, therefore what you are reading in the paper is half the story and in some cases isn’t even part of the story.  There were a lot of things in the articles I’ve read in the last couple of days that simply are not factually accurate.”

Theobald talked about increasing enrollment, making college affordable and allowing students to graduate in a timely manner. “I know that a university is more than earning degrees in a timely fashion without incurring too much debt. And being able to pay off that debt after graduation,” Theobald says. “They are also about preparing people to achieve their full potential. Yes to have a good career, but to also have much more.