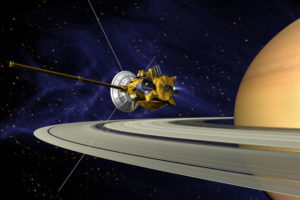 A spacecraft orbiting Saturn with University of Iowa-built instruments on-board is undergoing a course change this week that will take the robotic ship much closer to the ringed planet.

U-I research scientist Bill Kurth says the 20-year mission of Cassini is nearing its end and this new direction will be both exciting and saddening.

“This brings us to a new phase in the mission we call the Ring Grazing Orbits,” Kurth says. “The orbit will take us very close to Saturn’s F ring, which is a tiny ring on the outer edge of the main ring system.” Cassini was launched in 1997 and has been orbiting Saturn and its many moons since 2004, so Kurth looks forward to exploring new elements of the mysterious planet’s unique rings.

“Even though we fly through what is considered a clear zone, we’ll impact with probably hundreds of tiny dust particles per second,” Kurth says. “The Iowa instrument is sensitive to those impacts and we can understand how many of those dust impacts there are, giving us an idea of what the density of the dust is.”

Next April, new commands will be sent to the spacecraft which will propel it even closer to Saturn, into an orbit that just skims the cloudtops. Kurth says they’ll be able to analyze the lightning in Saturn’s thunderstorms which can sometimes last up to nine months.

“This will be below the ring system, the D ring is the inner-most ring, and above Saturn’s atmosphere,” Kurth says. “It’ll be a fantastic opportunity to study Saturn from a vantage point that we haven’t had before.”

Next September, Cassini will be given a final command that will send it plunging into Saturn’s atmosphere where it will burn up, a maneuver which leaves Kurth with mixed emotions. “It’s bittersweet,” Kurth says. “Certainly, we don’t like to see the mission end. It’s been highly successful. We make new discoveries on a regular basis. Certainly, going into these new orbits will be almost like a brand new mission for us.”

Kurth is also one of the lead researchers for Juno, the NASA spacecraft now orbiting Jupiter, which still has many years before it.