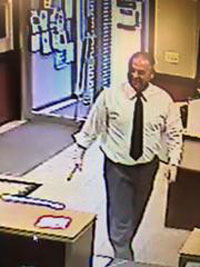 Law officers and banks are on alert in northwest Iowa after a man tried to defraud at least four banks in the region this week.

Le Mars Police Sergeant Jay King says the suspect used the same tactics at each stop, including at Kingsley State Bank in LeMars.

King says, “What he did is he would take a stolen check, a forged check, and write it out for a large amount, deposit it into a real account of somebody who was not involved in any of this but keep an amount of cash out, basically causing an act of theft for the amount he kited from the check.”

“The subject is described as a person of 40 to 50 years of age with a close-cut haircut,” King says. “He was wearing an Ace bandage on his right arm, dressed in business attire. He drove away in a white Chevy Impala.”

It appears the same man also tried the scam at two Sioux County banks — in Granville and Alton — and later at a bank in Sioux City. Officials would not say how much money was involved.