You are here: Home / News / Manheim Steamroller brings its Christmas sound to Iowa 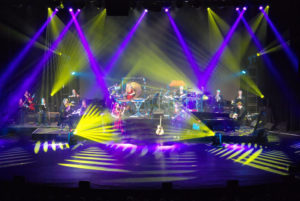 A musical act that’s redefined the sound of the Christmas season for many Iowans holds its first of three Iowa concerts tonight.

Chip Davis, the founder of Mannheim Steamroller, says they’re keeping a dizzying pace that even Santa’s magical reindeer would have a hard time matching.

“During this Christmas season, just in five weeks, we have over 100 concerts that we’re putting on between two touring companies, so it’s a busy, busy season for us,” Davis says. “The demand is even higher than what we can deliver, so we’re going to go into January, after Christmas.” The 69-year-old from Omaha founded the band Fresh Aire in the mid-1970s, which morphed into Mannheim Steamroller in the mid-80s — and they’ve now been touring seasonally and steadily for three decades.

“It started as a result of me wanting to merge classical form with some rock ‘n’ roll elements and instruments,” Davis says. “Then it migrated itself, my first album, into high fidelity stores and it was being used as demonstration material to show off speakers, turntables and amplifiers.”

While the unique music of the Steamroller has found fans around the globe, Davis says he’s continuing to find new outlets for his passion.

“I have a medical company in which I’m developing music and sounds that are used for healing,” Davis says. “We’re in such places as the Mayo Clinic and the Intrepid Center, Walter Reed. That’s another whole division, experimenting with using music and sounds for other than just in entertainment.”

The concert includes six members of Mannheim Steamroller, a 20-piece orchestra and a dazzling multimedia show with a host of special effects. Tonight’s show at the Civic Center in Des Moines is at 7:30 with another performance tomorrow afternoon.

The band will also perform in Spencer on December 15th and in Omaha on December 22nd and 23rd.