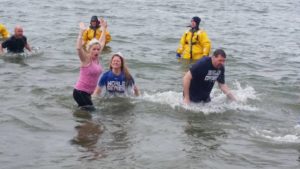 About 300 people made their way into the frigid waters of Clear Lake on Sunday afternoon for the 19th annual Polar Bear Club dip to raise thousands of dollars for two charities.

Heather Becthold of Nashua made her 14th plunge into the frigid lake. “It takes your breath away,” Becthold says. “You run in and all of the sudden, you just can’t breathe and it feels like your legs have pins and needles from the cold.”

Stacey Schmidt of Garner participated in the event for the second time and this year, brought her three kids along. “It’s a mix of emotions,” Schmidt says. “It’s exhilerating, it’s exciting, there’s tons of people around you having a bunch of fun. You don’t really notice the cold until you’re back out again.”

Breanna Rottinghaus says it was her first time leaping into the icy waters of Clear Lake. “I was jumping up and down repeatedly, very scared,” Rottinghaus says. “I ran in, blacked out, came out and feel awesome now. So worth it!”

The annual event raised $13,000 for Make-A-Wish and for Toys for Tots.