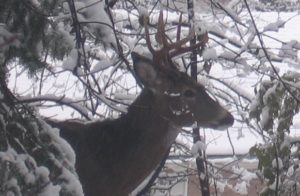 Iowa’s first shotgun deer season opened this weekend and hunters who were successful are being reminded to report their animal to the state’s harvest reporting system.

Chris Ensminger, a wildlife research supervisor with the Iowa Department of Natural Resources, estimates 20-percent of hunters who kill a deer fail to report it to the DNR. “We use that data to help us with our population models to get a better idea of what the deer herd is doing overall across the state – is it rising, falling, or are we stable? That kind of thing,” Ensminger said.

The reported harvest is also an important piece of information used when wildlife experts discuss possible changes to seasons or antlerless quotas. “A lot of our work is trying to make sure we’re at a number of animals that’s positive from a recreational, hunter standpoint, but also minimizes, as much as possible, social problems – things like car accidents and crop damage,” Ensminger said. “It’s a constant balancing act between those two pressures and we’re feeling like we’re at a pretty good spot right now between those two.”

Hunters who are caught failing to report within 24 hours of the deer kill can face a fine and court costs of roughly $80. Last year in Iowa, hunters killed just over 105,000 deer.