You are here: Home / Agriculture / Confirmed: Branstad tapped to be Ambassador to China 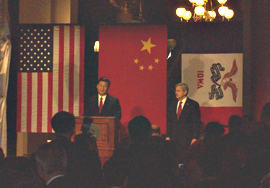 Governor Terry Branstad during a visit to Iowa by the future president of China Xi Jinping in 2012.

A spokesman for President-elect Donald Trump is publicly confirming Trump intends to nominate Iowa Governor Terry Branstad as the next U.S. Ambassador to China.

“There probably is no person in America today that’s probably better suited for that particular job than Terry Branstad because he’s tenacious, because he understands trade,” Vilsack said.

Vilsack, who served eight years as Iowa’s governor, is the only member of President Obama’s cabinet who has remained in the same role for the entire duration of Obama’s presidency. Vilsack told reporters in Des Moines today Branstad has the attributes that an ambassador needs.

“He’s hardworking. He cares deeply about business and agriculture. He’s a promoter and that’s what ambassadors do. They promote,” Vilsack said. “They make sure that if there are barriers or problems to getting American made products and goods into a country, they work to make a difference.”

Vilsack indicated, though, that “a lot patience” will be required in negotiating with the Chinese.

“In the agricultural space, we’ve been conversing with our Chinese friends for quite some time about biotechnology approvals, about beef, about a series of other issues that have not been easy. We’ve made progress, but there’s more progress that needs to be made,” Vilsack said. “I can’t think of someone who would be better suited to make that case than Governor Branstad and if that’s what he wants to do and what Mrs. Branstad wants to do, I wish them nothing but the best.”

Vilsack made his comments this morning in Des Moines after he received an award from the World Food Prize.

Both of Iowa’s political parties have issued written statements.

“I commend President-Elect Donald Trump for his decision to appoint Governor Terry Branstad as America’s ambassador to China,” stated Iowa GOP Chairman Jeff Kaufmann. “Over the decades as Governor, Terry Branstad has forged a unique and lasting relationship with Chinese President Xi Jinping. He is immensely qualified to strengthen the United States’ relationship with China and to promote economic prosperity and cultural understanding between the two nations. On a personal note, it is an honor to call Governor Terry Branstad a dear friend, and I wish him the very best in this future endeavor.”

“This is an incredibly important post to take. Governor Branstad’s long-term relationship with China’s President will hopefully result not only in a strong, positive relationship with China on behalf of the United States of America, but also a continued partnership with Iowa farmers, whose ag commodities are a central component of US trade–a boon for Iowa’s rural economy,” she said.