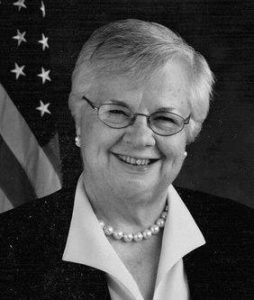 “First of all, when the president calls, the answer is: ‘Yes, sir. I’ll do it,'” says Mary Kramer of West Des Moines.

Kramer served as George W. Bush’s Ambassador to Barbados and the Eastern Caribbean. Kramer hasn’t talked directly with Branstad, but she has offered some advice to Branstad aides about this new role.

Kramer, a Burlington native, is a former state senator who at one time served as president of the state senate. She says Branstad is “uniquely positioned” to serve as Chinese Ambassador.

“I think Iowa benefits when we have people in those kind of leadership roles,” Kramer says.

Chuck Larson, Jr., a former state legislator who represented Cedar Rapids in the Iowa House and Senate, was appointed by President George W. Bush to be the U.S. Ambassador to Latvia. Larson, who also is a former chairman of the Iowa Republican Party, says it’s a “tremendous honor” for Branstad to be tapped to serve in China.

“I think this is a most amazing opportunity for our country and our state,” Larson says. “He’ll be simply great.”

Branstad first met the current president of China in 1985 when Xi  came to Iowa on an exchange. Xi returned to Iowa in 2012, just before he became president. Branstad hosted an elaborate state dinner in Des Moines, toasting Xi as an “old friend.”

“No one in America has a closer personal relationship with the president of China than Governor Branstad and so, regardless of who won the election, he was the right man for this job,” Larson says. “I’m thrilled to see him lead in this area.”

Dubuque native Kenneth Quinn served as the U.S. Ambassador to the Cambodia in the 1990s.

“Having an ambassador who has a personal relationship with a head of state — it doesn’t get better than that because in that way an ambassador is able to have an effectiveness that transcends what a traditional diplomat could do,” Quinn says.

Quinn was a career officer in the U.S. Foreign Service. Quinn says “protocol” will be “big.”

Making a “personal connection” with the Chinese people will be important, too, according to Quinn.

Quinn is now president of the Des Moines-based World Food Prize. He hosted an event this morning to honor U.S. Ag Secretary Tom Vilsack. Former Ambassadors Larson and Kramer were in the audience.