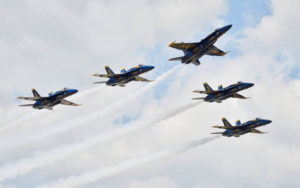 The Defenders of Freedom Air Show at Offutt Air Force Base near Omaha has been canceled for next year and it’s unclear when it may return.

The annual show draws huge summertime crowds from across Iowa and Nebraska. Drew Nystrom spokesman for Offut’s 55th Wing, explains why the 2017 show is being cut.

“Canceling the air show will provide the chance to align ourselves with the majority of Air Force installations which typically host open houses and air shows biannually or at even longer intervals,” Nystrom says. “We understand the air show and open house is a tremendous opportunity to highlight our missions, resources and people to the taxpayers. We’re committed to continuing the Defenders of Freedom Air Show at the next available opportunity.”

The upcoming air show was scheduled for July 1st and 2nd and was to be headlined by the Navy’s Blue Angels precision fighter jet team. Nystrom says it takes a lot of personnel and a lot of hours to put on the event.

“For us, mission comes first,” he says. “Right now, that’s the best way to handle it, is to prioritize that.” The air show also had to be canceled in 2015 for major runway repairs at Offutt.

“The 55th Wing airmen are providing world class intelligence, surveillance and reconnaissance around the world, every hour of every day and the demand for our capabilities is only growing,” Nystrom says. “We love hosting the Defenders of Freedom Open House and Air Show but our commander’s number-one priority is to take care of our airmen and one way to do that is to give back some time to them and their families.”

Nystrom says no future dates for the shows have been set.