You are here: Home / News / Trump’s to-do list for Branstad’s role as ambassador 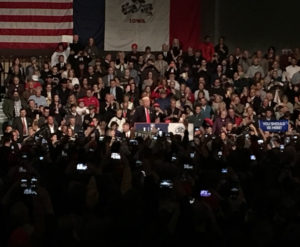 “I’m here today for one main reason: to say ‘Thank you’ to the great, great people of Iowa,” Trump said, and the crowd cheered. “You went out and you pounded, I mean, pounded the pavement.”

Trump touted his 10-point win in Iowa as “a lot more” than was expected.

“Just to go into this for a second, so we won almost every single county in this state,” Trump said. “…We won one county that wasn’t won since Dwight D. Eisenhower. Anybody know the name of that county?”

A few people in the crowd yelled: “Dubuque,” and Trump replied: “Correct!”

Trump was the first Republican presidential candidate to win Dubuque County since 1956. Trump spoke for about 45 minutes, promising to pursue a “buy American, hire American” agenda as president, with tax reform and the repeal of ObamaCare as top agenda items. 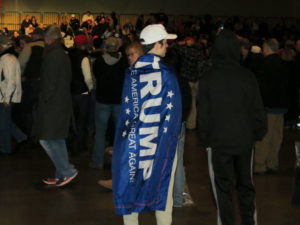 Trump also got cheers from the crowd when he asked if they liked his cabinet choices so far — including his decision to send Iowa Governor Terry Branstad to China as U.S. Ambassador.

“I can’t tell you how many people wanted that position. You know, it’s not bad. You go over there. You live like a king,” Trump said. “But he’s not looking to live like a king. He and his beautiful wife came to my office the other day. They’re willing to work on that relationship.”

Trump cited Branstad’s long-term relationship with the president of China. And Trump offered a litany of thorny issues Branstad will be charged with tackling with the Chinese. Trump complained that China is manipulating the value of its currency. Trump accused China of the “massive theft of intellectual property” from U.S. companies. And Trump blasted China for “not helping with the menace of North Korea.”

Trump introduced Branstad to the crowd.

“He’s going to do so great. With Terry on our side, I know we will succeed in bringing our jobs back and I also know the China that’s been so tough and so competitive and frankly, dealing with people that didn’t get it, but I’ll tell you we will have mutual respect and China’s going to benefit and America’s going to benefit,” Trump said, “and Terry’s going to lead the way.”

“It has been a great honor and privilege to serve the people of this state and thanks to our great new president who’s going to make America great again, I am very proud to serve America in this very important role,” Branstad said. “Thank you very much.”

Judy Gray of Titonka drove down for tonight’s rally with five other friends. It’s the first time she’s seen Trump in person.

“I think he’s going to shake some things up and maybe for the better, like even the Air Force One. Why do we have to spend so much?” Gray asked. “Those kind of things — and he’s going to find the cheapest way to get these things that we need.”

Earlier this week, Trump tweeted his displeasure over the price tag for the next Air Force One. Joy Marsh lives in Winnebago, Minnesota, about 20 miles north of the Iowa border. She voted for Trump and although he lost the state of Minnesota, the contest was closer than expected.

“I just wanted to come and see him,” Marsh said. “We had seen George Bush when he was running and we just thought we’d like to see Trump as well. He’s going to be our next president. We can always tell the grandkids.”

Joy Ellis of West Des Moines attended three or four Trump rallies before the Election as well as tonight’s. She voted for Trump on Election Day and watched the election returns into the wee hours of the morning.

Ellis is thrilled with the choices Trump is making for his cabinet.

“I think he’s picking good people for the spots he has available,” Ellis said. “I couldn’t have picked better myself.”

“He’s a man of discrimination and knowing. He has a lot of experience,” Worrell said. “He can read people pretty well.”

“I’d be very cautious to let somebody in that I don’t fully trust,” Worrell said.

Worrell, who is semi-retired after a career in Silicon Valley, wore the red “Make America Great Again” hat he was sent in the mail after donating to Trump’s campaign.

“Honestly, from the day he announced in Trump Tower, I knew he was going to win,” Worrell said. “I knew he’d have rough times, but he made it and he’ll be a great president — I can tell you that, too.”