You are here: Home / Agriculture / Vilsack doesn’t intend to retire, no post-USDA plans yet 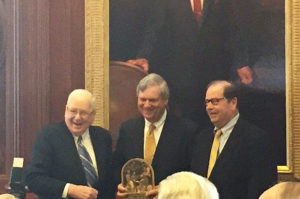 Former Iowa Governor Tom Vilsack plans to “run through the tape” when his eight-year tenure as U.S. Secretary of Agriculture draws to a close.

Vilsack’s the only member of President Obama’s cabinet who remains in the office where he started in January of 2009.

Vilsack made two speeches in Des Moines yesterday. He addressed delegates at the Iowa Farm Bureau’s annual convention. Vilsack referred to the 1986 shooting at a city council meeting that killed the mayor and wounded two others.

Vilsack also was honored Wednesday by the Des Moines-based World Food Prize. The Norman Borlaug Medallion is awarded to individuals and institutions which cannot win the World Food Prize. Both Vilsack and the USDA were presented with medallions. Borlaug is the Iowa native who won the Nobel Peace Prize for his pioneering work in plant genetics. Vilsack saluted Borlaug’s vision of “using science in order to improve the lives of all people.”

Vilsack, who will turn 67 on December 13th, isn’t planning to retire after he leaves the U.S.D.A. in January, but Vilsack told reporters yesterday that he has no firm plans yet.

“I want to be involved in one way, shape or form of advocating for agriculture, for rural America and I have, obviously, an affinity for young people so it’s an opportunity potentially for Christie and me to team up with some young folks,” Vilsack said.

The Vilsacks have two married sons — one in Iowa, the other in Colorado. The former governor says “family is important” and he and his wife want to “spend time” in both states with their four grandchildren.