You are here: Home / News / Governor-in-waiting Reynolds says her lieutenant governor will be ‘partner’ in governing (AUDIO) 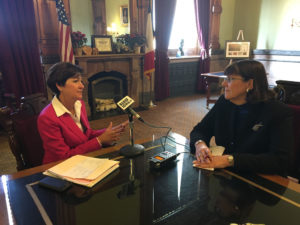 Lieutenant Governor Kim Reynolds today said she and Governor Branstad have had an “excellent working relationship” and she’s prepared to take over as the state’s chief executive when Branstad leaves to become the U.S. Ambassador to China.

“I can tell you that not a lot of lieutenant governors have the opportunity to be really recognized as a full partner and so that’s not been lost on me, the opportunity that I’ve had,” Reynolds said this afternoon during an interview with Radio Iowa this afternoon. “When he asked me to run he said we’re going to run as a team and serve as a team and he’s been really true to his word and I appreciate it.”

An outline for the transition of power is being developed, but there’s no date set for Reynolds to take the oath of office and become Iowa’s next governor. 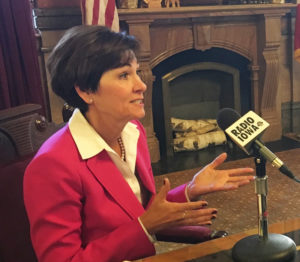 “The governor is still the governor. President-elect Trump isn’t inaugurated until January 20th and then we’ll start to work through,” Reynolds said. “We’ll be putting a process in place between now and then, of course, and kind of an outline of how that transition will take place. We’re looking at what’s happened in Iowa and other states, but we have some time to really implement that and so we’ll be coming with more details soon.”

Reynolds said she’s working with Branstad and the entire “team” in their office to put together a package of recommendations for the 2017 legislative session. And it will be Branstad who’ll deliver the annual “Condition of the State” message to legislators in early January and present a state budget outline for the coming year.

“Once he is…confirmed by the United States as the next ambassador to China, we’ll take a look at where we’re at and more forward from there,” Reynolds said.

As for whether Reynolds might make significant personnel changes in state government, she said this is “just the second day” after confirmation of Branstad’s exit and her pending elevation to the governorship.

“We have had a phenomenal team. No one individual does this alone. You know, you set a broad vision. You set forward aspirational goals and then you give them really the flexibility and the latitude to implement them,” Reynolds said. “That drives innovation. That drives them really thinking outside of the box and looking for different ways that they can help us accomplish the goals and, gosh, I’ve seen that in almost every single agency so I’m really excited about the team we’re put together and they’ve done a great job.”

Reynolds isn’t ready to say who she’s considering to invite to be her lieutenant governor once she takes the oath and is Iowa’s 43rd governor, but she has “a lot of individuals” on her list.

“I want to sit down and talk to them,” Reynolds said. “I like the partnership role. I will continue that. I think that’s been beneficial to Iowans. It’s beneficial for the consistency and continuity of government to have a lieutenant governor who really understands the role and what the administration and executive branch responsibilities are, so I will continue that same structure.”

Reynolds said she’s looking for “good chemistry” since she will consider her lieutenant to be a governing partner. After 42 previous governors who were men, Iowa’s 43rd will be a woman and Reynolds hints she’ll run as an incumbent in 2018 — to become the first woman elected as the state’s governor.

“Honestly, right now we’re preparing for the legislative session and really putting our program together and looking for ways that we can continue building on what we’ve done and my goal is to be a part of that for a long, long time,” she said.

Reynolds served in local government as the treasurer in Clarke County before a two-year stint as a state senator, then she accepted Branstad’s invitation to be his lieutenant governor running mate in 2010. She’s the fifth woman in a row to serve as Iowa’s lieutenant governor. Until 2014 — when Joni Ernst was elected to the U.S. Senate — only the states of Iowa and Mississippi had never elected a women as governor or to federal office.

“I’m really proud to have the opportunity to be a part of history,” Reynolds told Radio Iowa.

Not only is Ernst the first female senator from Iowa, but Reynolds pointed to Linda Upmeyer, who last year became the first woman to serve as speaker of the Iowa House. “Probably the majority” of state agency directors are women, too, according to Reynolds.

“Although I’m proud of that, what I’m most proud of is I think for all of them it was not really about gender, but it was about a passion to serve and to make a difference and that’s what I think is reflected in every one of the individuals that I just named and that’s what I think is really important,” Reynolds said. “So, kind of as a side bonus, though, young girls in this state have some wonderful role models.”

Reynolds, who is 57, is a native of St. Charles. She and her husband live in Osceola.