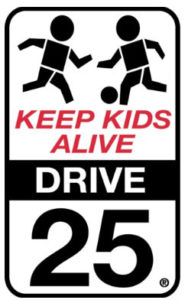 A non-profit traffic safety group is getting a $25,000 grant to launch a new initiative after a southwest Iowa teen was hit and killed while jogging on a rural road east of Council Bluffs last year.

Tom Everson is founder and executive director of the Omaha-based organization, “Keep Kids Alive Drive 25.” Everson says the effort is in memory of Tristan White of Treynor.

“He was 14 years old and he was running with his wrestling team for practice in November of 2015 when he was struck,” Everson says. “He died as a result of his injuries from being hit by a pickup truck.” Everson is working with members of the Junior Optimist Club at Treynor High School and the students have helped develop a course of action to remember Tristan.

“His family connected with our mission which is to help make streets safer for all who walk, cycle, play, drive and ride, so, essentially, that’s all of us,” Everson says. “We’re concerned about traffic safety on and along roadways.”

The traffic safety education campaign is being called “A Licence To Drive” and it targets everyone. Pedestrians, cyclists and others need to actively work to prevent themselves from becoming a hazard for motorists.

“As a motorist, that includes paying attention to speed, putting our cell phones away, throwing them in the trunk if we need to so we can concentrate on the task of driving, not following too close, observing stop signs and traffic signals,” Everson says, “doing things the correct way.”

The grant comes from State Farm, the largest auto insurer in Iowa and Nebraska. Everson founded Keep Kids Alive Drive 25 in 1998 as he and his wife were concerned about the safety of their kids, who ranged from age 4 to 10 at the time. He’s since worked with more than 1,600 communities in the U.S., Canada and Australia.