You are here: Home / Agriculture / Northey would be interested in lieutenant governor role 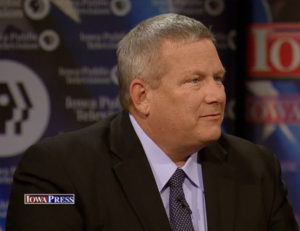 Iowa Ag Secretary Bill Northey on Friday said he’d be willing to serve as Kim Reynolds’ lieutenant governor once she takes over as governor.

There’s no firm timeline yet for the transition of power, as there’s no date set for when Governor Terry Branstad will be confirmed for his new post as U.S. Ambassador to China. During an interview Friday afternoon with Radio Iowa, Reynolds said she has a list of individuals she’s considering to invite to be her lieutenant governor. Northey issued a statement earlier this week, announcing he would not run for governor himself in 2018 and calling on Iowa Republicans to rally behind Reynolds.

Northey said Friday that the “math certainly changed” with Branstad’s looming exit and — since it is well known in political circles that he’s been considering a run for governor — he wanted to make his intentions clear.

“I think it’s important to support our next governor, to be able to have a strong two years with the Iowa legislature,” Northey said.

Northey is in the midst of his third term as the state’s ag secretary.

“I certainly am interested in being able to serve Iowans,” Northey said, adding he’s “open” to leaving his post to become the state’s lieutenant governor, but Northey indicated there are “a lot of great folks” who could fill that role.

Northey made his comments on this weekend’s edition of the Iowa Public Television program, “Iowa Press”. Earlier this week, Congressman Steve King told The Hill — a Washington, D.C. publication — that he wouldn’t rule out running for governor in 2018. King spoke with Radio Iowa Friday afternoon.

“We don’t need to focus on that part just too hard,” King said, with a laugh. “Here’s how this is and that is that Kim Reynolds will be the next governor of the state of Iowa. She is a terrific friend. I’ve been able to call her a friend for over 20 years and I’ve worked with her and supported here when she ran for office, particularly the Iowa Senate, nominated her for lieutenant governor before the state convention (in 2010) and so I’m very happy to see her ascending to the governorship.”

King said you “never say never” in politics, though, so when he’s asked about running for governor, he won’t automatically rule it out.

“You don’t want to foreclose anything that might be an option that could be a calling in the future, so that’s the substance of that answer, but right now I want to congratulate Kim Reynolds and help her be the best governor she can be,” King said. “I count her as a good friend and I want to keep it that way.”

King and Reynolds talked Thursday evening as both stood in the VIP section at President-elect Trump’s rally in Des Moines.