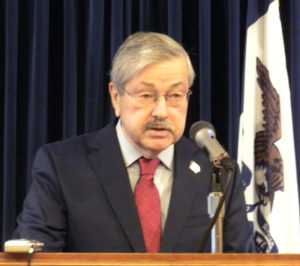 Governor Terry Branstad spoke today for the first time about the transition at the top of state government when he leaves to become the U.S. Ambassador to China.

Audio: Governor and Lt. Governor on the transition. 15:00

Branstad says he may be in office through this year’s legislative session, as he says history shows it can take some time for an appointment to be approved by the U.S. Senate.

“In 2009 President Obama announced his intention to appoint former governor Hunstman from Utah as the Ambassador to China. That was May 16th. Governor Huntsman was eventually confirmed on August 7th,” Branstad says. He says he will continue with business as normal until his is confirmed by the Senate.

“President-elect Trump’s inauguration is not until January 20th, and based on that date, I will be delivering the condition of the state address to the 2017 general assembly. As well as presenting the biannual budget …and the Lieutenant governor and I will be putting that together,” Branstad says. Branstad says it’s anybody’s guess when his confirmation will happen. 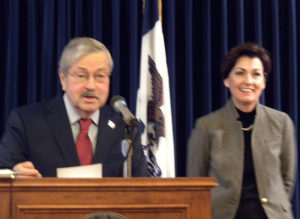 Branstad says it is possible he could be governor through the legislative session as the session does not always end when it is supposed to end.

“Well, it depends on how long the session goes,” Branstad then paused and chuckled,  before saying, “that we don’t know.”

Branstad is the nation’s longest serving governor and has been the one making the final decisions for the state. He was asked how he feels about taking position where he will now answer to someone else.

“Well, I’m a humble guy, so I understand and respect that it is a different position. You are no longer the chief executive of the state — instead you are part of the United States government representing our country in the biggest country in the world, China,” Branstad says. He acknowledges he will face challenges in his new job.

“There’s a lot of issues that’ll have to be dealt with….I’m told there is a big staff and in addition to the embassy there’s also five consulates throughout China that would be under the direction of my department,” according to Branstad. Branstad says president-elect Donald Trump is straightforward and decisive. He says Trump sought to assure him about his views on ethanol during Trump’s thank-you tour visit to Iowa. Trump had just announced he is appointing the Attorney General of Oklahoma, an oil state, to head the EPA.

“First thing Trump told me was ‘don’t’ worry he’s going to be for ethanol’,” Branstad says. “I think that was a condition he laid out when he appointed him.” 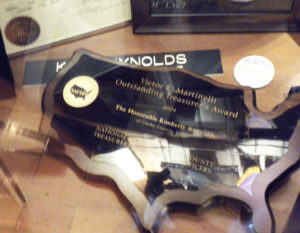 Plaque honoring Kim Reynold’s as nation’s top treasurer in the trophy case outside the governor’s office.

Branstad says he has worked as a team with Lieutenant Governor Kim Reynolds and is confident she will do well. He talked about a plaque in a trophy case outside their office that Reynolds won in 2003 for being the top county treasurer in the country, and says it shows the respect she has.

“And I think that has been a great assurance to people involved in county government, they have somebody who understands their responsibility and has worked at that level well,” Branstad says. “And I think that that has served her well as lieutenant governor and will serve he well as governor.” Branstad says he may have to travel to Washington, D.C. a few times for the confirmation process, and says Lt. Governor Reynolds will handle things just as she has when he has been out of the state in the past.

Branstad says he’s also been told that he will have to fill out a mountain of paperwork to be confirmed as an ambassador, but hasn’t seen any of it arrive yet.