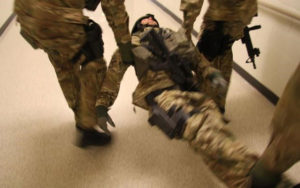 EVAC strap in use.

A law enforcement officer in a small southeast Iowa town has created a device that’s designed to make it easier to carry out officers or other first responders when they’re injured in the line of duty.

Keota Police Chief Doug Conrad told KCRG-TV he began developing the EVAC-STRAP after the death of his friend, Rockwell City Police Officer Jamie Buenting in 2013. A report on the incident cited difficulties in getting Buenting to a safe location for treatment.

“They talked about how they had to carry him a block to the ambulance,” Conrad said. The 37-year-old Buenting was shot and killed during a standoff with a man who was later convicted of the murder. Shortly afterward, Conrad made the first version of the EVAC-STRAP.

“Almost immediately I took an old seat belt, took it to a cobbler and had him sew handles on to it and put belt keepers on the back,” Conrad told KCRG. After some trial runs, he came up with a new model. The EVAC-STRAP now attaches to an officer’s body armor, and the thicker stitching can carry more weight.

“When you’re talking about a 100 to 300 pound individual it’s a lot harder to carry them without something to grab a hold of,” Conrad said. “There’s a handle under each one of your armpits so it would be very easy if you’re laying on the ground to pick you up and carry you out.”

In certain scenarios, this can be the difference between life and death. The EVAC-STRAP cuts carrying time in half, according to Conrad. The police chief has pictures above his desk of Iowa officers killed on duty that serve as his motivation.

“These are my heroes and if I can help someone else in the future to maybe not have this sort of outcome, then that’s my goal,” Conrad said.