You are here: Home / News / More snow forecast as part of the state is under a wind chill advisory 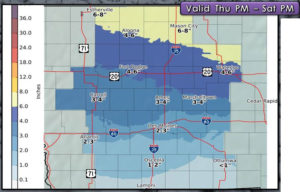 On top of the bitter cold temperatures, forecasters now say much of the state is in for more snow, with the heaviest amounts again falling across Iowa’s northern third.

Meteorologist Roger Vachalek, at the National Weather Service, says very cold air will move in tonight and remain into Thursday.

“We have a storm system on Friday which is going to bring us some snow across the state,” Vachalek says. “We may see a couple of inches across central Iowa and even more snow across the northern counties, the far north and into Minnesota.”

Northern Iowa may get six to eight inches of snow by Saturday, which follows a similar snowy blast just a week ago. After the snow clouds pass, extremely frigid conditions will be left behind.

“Following that storm, probably the coldest air of the year will move into Iowa for Saturday night and Sunday,” Vachalek says. “The northern portion of the state may see lows from 15 to 20-below zero and by Sunday morning, wind chill values could easily exceed 30-below zero across the northern portions of the state.” The deep freeze won’t last and there is warmer weather on the way.

Vachalek says, “After this very cold weather this weekend, we’re actually going to see highs in the 20s and 30s for next week and it will feel warm compared to what we’re seeing right now.”

A Wind Chill Advisory is in effect from 9 tonight until 9 tomorrow morning for much of northeast, far northern and east-central Iowa.