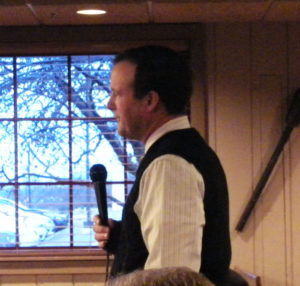 Two of the top Republican leaders in the Iowa Legislature gave a few details today on the agenda they’ll pursue in January.

Senate Majority Leader Bill Dix of Shell Rock says he is one of the few legislators who were around the last time the Republicans controlled the House, Senate and governor’s office. “The message that I am taking from voters is that they expect us, for lack of a better term, to kick the door in. We don’t expect government to continue to do business the way that we have,” Dix said.

“We can add additional dollars to the per pupil funding on an annual basis — and we almost always do — yet some districts because of declining enrollment will have less resources to work with. So the answer to many of our problems, including this one, is growth,” Dix said. “There are a lot of lessons that we can learn. All across the country the last couple of decades — the state’s that are growing the fastest are the ones that are exercising fiscal discipline.”

Dix said tax reform is part of the solution to helping the state grow. “High income tax punishes people who want to work, save and make investments in our state. And we need to recognize that. And the states that have grown the fastest the last couple of decades across our country today are the ones that either lowered their rates, broadened their base, kept things simple, or moved to no income tax at all,” according to Dix.

On another issue, he expects to Senate to handle is requiring an I.D. to vote. “Without question we need to continue to work to ensure higher levels of integrity in our voting system. And one of the best first steps we can do that is in voter identification. A voter I.D. is clearly something we can do,” Dix said. That statement drew applause from those in attendance.

Dix told reporters after the meeting he did not have time to answer questions on his remarks.

House Majority Leader Chris Hagenow, a Republican from Windsor Heights, was also on the program. He told the group he is excited to have a Republican Senate to work with. Hagenow said House members have had some initial planning meetings, but haven’t gotten down to specifics just yet.

“We have to still talk in terms of themes and top priorities, and then once we come around to January and work on that. But what I can say, is in the Republican majority in the House we did a lot of these things. Over the last six years some of the bills that we passed are going to be the starting point going forward,” Hagenow explained.

He said many of those things were blocked when the Democrats controlled the Senate, but now things like water quality will be back on the table.

“We did a big bill on that last year — it didn’t pass the Senate. There’s the starting point for what we’d like to work on water quality,” Hagenow said.

He listed tax reform as another important issue for the Iowa House. “We passed tax cuts, we passed different ways to reform the tax code in the past- there’s the starting point,” Hagenow said. “And I now that’s something Senator Dix cares passionately about and his caucus does too. Are there changes to Iowa’s collecting bargaining laws? Well, we’ve had some common sense ideas that we’ve passed in the past.” Hagenow said the changes to collective bargaining laws, like other issues, were blocked by Democrats in the Senate.

He said there are a variety of other issues they plan to bring up again. “The election law reforms that we talked about, we’ve done some of those things,” according to Hagenow. “Many of you care about the Second Amendment and making sure we protect Second Amendment rights. Year-after-year we have passed legislation to do that. Now we have a partner who is going to work with us on that.”

Hagenow said it looks like Governor Terry Branstad will be in the state for much of the legislative session and when the governor does leave to become Ambassador to China, he expects little to change in the working relationship Republican legislators will have with new Governor Kim Reynolds.