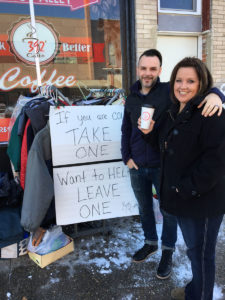 It’s bitter cold as winter approaches and an eastern Iowa woman’s actions to give warm coats to the needy is, well, snowballing.

Becky Jahns, of Clinton, says the concept is simple: if you have an extra coat, donate it, and if you need a coat, take one. “I don’t know that I’m so much surprised, but I’m overwhelmed by the community and the support,” Jahns says. “The citizens are coming together and now it’s going on into other cities.”

Jahns saw the idea on Facebook, where it was suggested somebody put a coat rack in a public area where coats could be donated and taken.

“Let people be warm for the holidays,” Sanders says. “It’s such a simple act but it means so much to them and to you, so it’s really cool that way.” Jahns says people have been donating coats and people in need have been taking them. She says there are times the rack is nearly empty and a short time later, it’s full again. Sanders says it’s heartwarming.

“It wasn’t my idea, it wasn’t even Becky’s idea, it was just something that inspired her to want to do something good and we were inspired to be that location for her to do it and it’s just blown up into this,” Sanders says. “People keep giving us praise for it but we just deflect it to the greater good of the community. That’s how good the community is.”

Jahns says the effort will be on-going until it’s warm in the spring and there are already plans to bring it back next winter. At least six other eastern Iowa communities have launched similar coat rack efforts in the past week after seeing Jahns’ posts on Facebook.