You are here: Home / News / The weather outside is going to be frightful this weekend 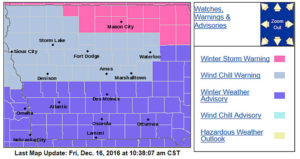 The weekend ahead may be the coldest Iowa’s experienced in seven years, according to meteorologist Todd Heitkamp at the National Weather Service office in Sioux Falls.

The entire state is blanketed with winter weather watches and warnings, and parts of northwest Iowa will be seeing snow fly shortly.

“We do have a winter weather advisory out for snow that’s going to be developing around the area this afternoon and continuing into the evening and overnight,” Heitkamp says. “We’re expecting two to five inches of snow.” More than a dozen counties across north-central and northeast Iowa are under a Winter Storm Warning as that region may get up to nine inches of snow by Sunday. Heitkamp says the wind chill factors will be exceptional through the weekend.

“We’re going to be dealing with increasing winds later tonight,” he says. “As the snow begins to taper off, the winds will increase and gust up to 30 miles-an-hour during the day tomorrow, and as the winds start to increase, the cold will filter in along with those winds and we’ll be dealing with probably the coldest air we’ve seen around here in last four to seven years.”

By Sunday morning, air temps statewide will range from zero to 20 below, while wind chills could be 25 to 40 below zero. Iowans will need to take special care as they venture outdoors.

“People need to understand the importance of dressing appropriately when dealing with adverse cold like this,” Heitkamp says. “There’s going to be a lot of people outside Saturday, clearing off the sidewalks and driveways. Limit the amount of time you’re doing that, take frequent breaks and dress appropriately by making sure all exposed flesh is covered.” While the weekend weather sounds foul, there’s a turn-around coming in the forecast.

“It’s going to warm up pretty quick on Monday,” Heitkamp says. “We’re looking at a high of 25 on Monday and then warming back up into the mid- to upper-30s on Tuesday so we’ll see almost a 60-degree temperature swing. It looks fairly nice next week but by Christmas, we may get hit with another shot of cold air coming in from the north.”

The first day of winter is next Wednesday, December 21st.