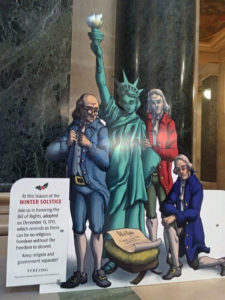 The Freedom From Religion Foundation is sponsoring a display in the Iowa statehouse that’s directly across the capitol rotunda from the nativity scene that was unveiled there a week ago.

“We want to make sure that those of us who are not religious are also represented in the state capitol, which is the seat of state government,” says Annie Laurie Gaylor, the foundation’s co-president, “because at this time of year nonbelievers and non-Christians feel like second-class citizens.”

Gaylor says her group is happy to “share the season” of the Winter Solstice with Christians.  “But we don’t like this pretense that it’s about the birth of their savior,” she says. “It’s really about the Winter Solstice which is a natural event happening on Wednesday this year, December 21st — the shortest, darkest day of the year and it’s been celebrated for millennia in the northern hemisphere with festivals of light and evergreens and gift exchanges and so on.”

The Freedom From Religion display mentions the Winter Solstice. It also has the “Bill of Rights” pictured on top of a manger. 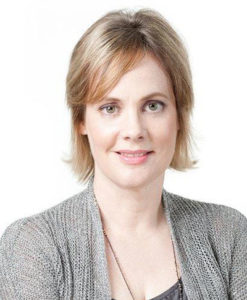 “We have a ‘Bill of Rights…Nativity’, slightly tongue-in-cheek, where we have the framers and founders gathered around a crèche that contains the Bill of Rights,” she says. “And they’re looking very adoringly at it and we think that’s very appropriate.”

The Bill of Rights was adopted on December 15, 1791 and this past Thursday was Bill of Rights Day. The text on the statehouse display says: “Keep religion and government separate.” Gaylor says her group’s display was only erected in Iowa’s capitol because the nativity was placed there last week.

“We think that the rotundas are getting kind of cluttered around the country and we’d rather see no public forum in December because it’s divisive,” Gaylor says. “But if there’s going to be Christian display, there has to be room at the inn for the rest of us.”

Last Monday, Governor Terry Branstad attended a ceremony marking the installation of a nativity scene in the state capitol. A spokesman for the group sponsoring the display said it’s meant to share the “good news of the season.”

Martin Concannon of the Thomas More Society said the good news is that “the creator of Satan himself has defeated evil” and offers “his protection.”