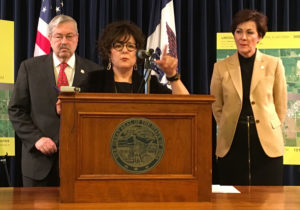 Officials in five more Iowa cities have completed a rigorous process to confirm sites in their communities are ready for immediate industrial development.

The cities of Clinton, Grinnell, Forest City, Osage and Waterloo now have attained “shovel ready” certification for land in their communities. It means businesses that build on that land won’t run into roadblocks over hidden environmental issues or discoveries of cultural relics.

Governor Terry Branstad invited representatives from the five Iowa communities to a news conference in his office this morning. “Economic development has become more and more competitive and more and more sophisticated,” Branstad said. “If you want to be really successful at it, you’ve to do more things and you’ve got to be better prepared.” 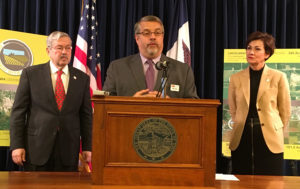 Eleven other Iowa communities have “certified” industrial sites. The certification includes an analysis of how much water would be available, how to secure broadband for the business and how many people in the area could be hired. Clinton Mayor Mark Vulich said it took nearly five years to complete the process.

“We’ve had a number of firms come look at our park and, as we’ve been able to develop the pieces to the site certification process, you know, we’ve already got answers to a lot of the things they want to know. Have there been environmental studies done? What do we have for water? What’s the availability of gas, electric, the other utilities? And as we’ve actually worked on the certification, we’ve started to have those answers,” Vulich said during the news conference. “And I can see going forward that it’ll be a lot simpler, that there’s actually now a book and, ‘Here. Everything you could possibly want, we’ve got those answers.'”

Laura Manatt, executive director of Poweshiek Iowa Development, said Grinnell’s site — like the 15 others that are now “certified” — will be marketed by the state to prospective businesses.

“It gives a small, rural community like ours a lot more exposure in the state and on a national level,” Manatt told Radio Iowa, “and just having Debi (Durham) and her group and the governor and his group out there promoting Iowa and promoting our sites to help a small community that may couldn’t afford to go out there and do it on our own.”

Forest City Mayor Byron Ruiter said his community’s site has a railroad line leading to it.

“First thing they had to do was buy the railroad track from Garner to Forest City and a conglomeration of people went together — investors — and bought it,” Ruiter told Radio Iowa. “So that opens up that rail line to come to Forest City now…We’re looking at a warehouse possibly going in there with rail traffic.”

Lieutenant Governor Kim Reynolds said the goal is to have one of these shovel-ready, “certified” sites in each of Iowa’s 99 counties.

“Companies today are conducting their site searches on a very aggressive timeline and the sooner that they can begin their projects, the sooner they can get to work to realize their business goals and that’s why site certification is a growing national trend,” Reynolds said.

Iowa’s process is unique because a private-sector firm conducts the review and issues the certification. In other states, the certification process is done by state agencies. The director of the Iowa Economic Development Authority says the independent confirmation of a private firm makes Iowa’s “certified” sites more attractive.

AUDIO of news conference where “certified sites” were discussed.