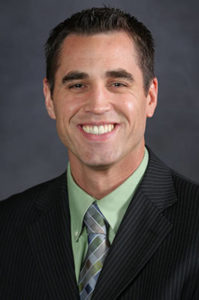 There are plenty of Iowa connections on the coaching staff at North Dakota as the Fighting Hawks get ready for Tuesday’s game in Carver-Hawkeye Arena. North Dakota head coach Brian Jones played at Northern Iowa and spent seven years as a Hawkeye assistant under Steve Alford and former Iowa standout Jeff Horner is in his third season on the North Dakota staff.

“Jeff was phenomenal when we were recruiting Pete”, said McCaffery. “He is certainly on of our all-time greats and I have a lot of respect for him.”

Horner was Mr. Basketball in Iowa in 2002 as a senior at Mason City High School and became Iowa’s all-time leader in three pointers and second all-time in assists.

“I am happy that his coaching career is going as well as it has and I think he has an incredibly bright future.”

North Dakota’s roster also includes several Iowans. Sophomores Cortez Seales and Marlon Stewart were teammates on the North Scott High School team that won its first Iowa Class 4A state title in 2015. Stewart transferred to North Dakota this past off season from Creighton and is sitting out the 2016-17 campaign. Freshman Billy Brown was third in Iowa Class 3A scoring last season averaging 21.7 points per game for Spirit Lake High School.