You are here: Home / News / Winter weather leads to accidents and injuries, at least one death 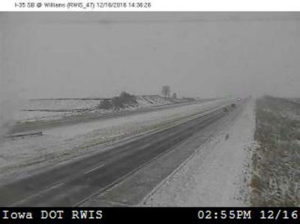 The storm moved into Iowa Friday.

With overnight temperatures well below freezing, frostbite and hypothermia are getting a lot of attention, but they’re not the most common cause of injuries during the winter.

“Patients who have underlying heart disease, if they start shoveling snow, they’re putting their heart under strain,” Dr. Dierks says, “so we’ll see patients who come in with chest pain and who actually have heart attacks related to that.”

A man died of hypothermia in Cedar Rapids over the weekend following a single-vehicle car accident, while a homeless man in the Quad Cities had severe frostbite after falling asleep in the snow with no gloves. Dierks says another major wintertime hazard is icy sidewalks and driveways.

“I’ve seen a lot of fractures over the past month, people falling and slipping,” she says. “Some of the more life-threatening injuries are patients who are on blood thinners, if they’re on (certain medications) and they slip and hit their head, they may have bleeding on the brain. We also see patients who slip and fall on their hip and break their hip.”

Some of her patients are poisoned by faulty furnaces sending carbon monoxide into their homes. Others are injured in car accidents caused by winter conditions. At least three people died statewide over the weekend in crashes where icy conditions were a factor.