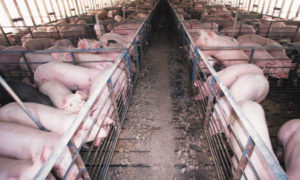 Twin brothers from Coon Rapids are charged in a series of livestock thefts over three years.

Charges are filed in Carroll County against 20-year-old Jerome Boblett and his twin brother, Justin. They  are facing the charges after a farmer they worked for, Joe Danner, noticed he was short on hogs and called the Carroll County Sheriff’s Office on September 10th.

Sheriff Ken Pingrey said the ensuing investigation revealed the Bobletts had been taking small numbers of hogs from a variety of different locations going back to 2013. They were able to do this undetected because as employees they could report the missing hogs as dead.

The theft in September was a bolder move by the pair, who took and sold 22 head of hogs to Lynch Livestock, northwest of Carroll. The investigation uncovered a paper trail for payments that led authorities back to the Boblett brothers. The estimated dollar value of stolen hogs to date is over $40,000.

The investigation into the thefts continues and other arrests may be pending.