You are here: Home / News / High volume of holiday travelers expected to hit the roadways once again 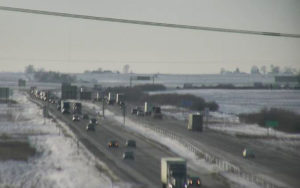 Traffic on the Interstate near Davenport.

A record number of travelers are expected to be on the roads in Iowa and nationwide over the upcoming year-end holidays and as demand for gasoline rises, so will the price.

“That’s in large part due to OPEC deciding to reduce production, effective January 1st,” Weinholzer says. “It’s just a minor reduction, about 3%, but the intent, of course, is to push gas prices up a little bit so it’s more profitable.” Iowa’s current average gas price is up 25-cents from a year ago. Despite the bump, Weinholzer says the current pump prices are significantly lower than they’ve been in years past and it won’t keep people from heading out for the holidays.

Weinholzer says, “We expect just over 103-million Americans to travel at least 50 miles or more between this Friday, the 23rd, and Monday, January 2nd.” That’s a one-and-a-half percent increase from a year ago, or about one-and-a-half million more travelers, and the highest total volume since Triple-A began tracking holiday travel data in 2001.

“We’re seeing more people traveling. This is the 5th holiday this year that we’ve measured an increase over the previous holiday last year,” Weinholzer says. “Starting with Memorial Day, Fourth of July, Labor Day, Thanksgiving and now Christmas/New Year’s, all five have shown an increase over the same holiday in 2015.”

The motor club’s daily survey shows Iowa’s cheapest gas is in Davenport at $2.09 a gallon while Des Moines has the most expensive average price at $2.33. The statewide average of $2.20 is four-cents cheaper than the national average.