You are here: Home / Crime / Courts / Some Jasper County drivers receive turkeys instead of tickets from deputies 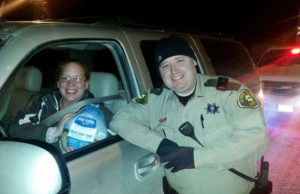 Reserve Deputy Rod Eilander with Jessica receiving her turkey during a traffic stop.

Some drivers in Jasper County this past weekend got a surprise after being pulled over by Sheriff’s Deputies.

Sheriff John Halferty says his deputies carried out a plan suggested by one of their colleagues. “One of the reserve deputies came up with the idea of potentially giving away free turkeys on traffic stops during the holiday season,” Halferty explains.

He says the local Walmart and Hyvee donated 25 turkeys to be given out. The Sheriff says motorists who were pulled over ended up with turkeys instead of tickets.

“Deputies and reserve deputies conducted traffic stops that were minor violations — and instead of writing citations or warnings — the drivers received a turkey for the holidays,” Halferty explains. He says it was a way for his department to thank the community for the continued support they give, while reminding them to be safe on the roadways.

“This is a good positive event for our deputies to contact motorists and just encourage them to drive safely, wear their seatbelt, and always use proper safety seats for their children,” he says. Halferty says he hopes this becomes an annual tradition for his department.

(Thanks to Randy Van, KCOB, Newton/Photo courtesy of the sheriff’s Facebook page)