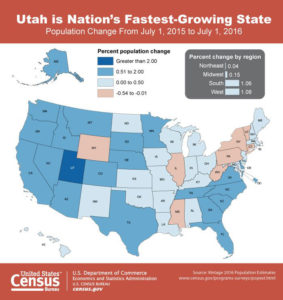 State Data Center coordinator Gary Krob says we’ve been in the same growth situation for nearly two decades.”It’s really the kind of growth we’ve seen in our state since about 1988. Just kind of slow, steady growth. We don’t grow very quickly, but we continue to grow,” Krob says. Most of the growth has come in the metro areas of the state.

“There’s a number of cities and counties that have actually seen a lot of growth. We won’t know for sure what their 2016 numbers will be until late spring, early summer of 2017 when the Census Bureau will release those numbers,” Krob says. “But if we look back at last years’s we saw some definite growth in the urban metropolitan counties and then the suburbs.”

He says things remain on the positive side for the state when it comes to “natural change.” “We have more births than deaths which is always a good thing,” Krob says. “The other component is migration. We currently have pretty good international migration into the state and really kind of relative small negative out domestic migration from out state compared to previous decades.”

Krob doesn’t see many numbers that jump out from the latest estimates on state populations. “Nothing that’s really unusual….a couple of neighboring states have seen significant population growth — specifically North Dakota and South Dakota. Illinois actually had population decline between now and 2010 — so that’s kind of interesting,” Krob says.